Most of us has at some point in our lives used the Math.sqrt() function. We would even know that \(\sqrt{2} = 1.414\ldots\). However, we never really give how it is implemented a second thought. Thus is the power of a tight abstraction. For those of us who lived in the age of calculators, finding square roots has always been a source of mystery. For me during my teenage years, calculating a square root has really just been about looking up a numeric table. 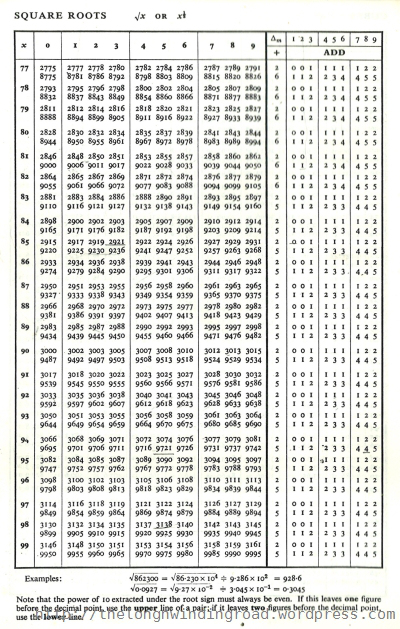 Obviously this very simple problem would have been solved close to the beginnings of civilization, and blazingly fast methods must already exist. But for sake of exploration, let us examine how we would implement a square root function should we need to.

One way to find a square root is by looking at this graph of \(y=x^2\). Simply drawing a horizontal line from the y-axis from whose square root we desire to the graph line, and then find the intersect on the x-axis. So say we want \(\sqrt{30}\).

This in-betweenness tells us something about square roots. Besides the nice square roots, the ugly ones don’t seem to have any end to their decimals. Hence, they are always in between two numbers that we know. This means that we can keep making educated guesses about where the square root is until we get close enough.

Let’s apply this knowledge first and do the calculation by hand for the number 30 since we know its answer so we can verify that our method is correct.

First of all, we must figure out where the root is. Obviously, it would be less than 30, since you need to multiply it by itself to get 30. Its also more than zero, because as mentioned earlier, you will always end up with a positive number.

Nope. Not even close. 225 is waaay too big. But this tells us something: the root cannot be bigger than 15 because if it was, we would get an even bigger square than 30, so we must look to the left of 15. This means our upper bound is now 15 instead of 30.

The number in the middle this time is 7.5. Is this our number?

Still too big. This means our root must be smaller than 7.5, but still bigger than zero.

It seems the square of 3.75 is smaller than 30! This means that that the root must be bigger than 3.75 since if the number is smaller, we get an even smaller square, we must be getting close.

It seems we have gotten a lot closer now that we moved the lower bound up. Our guess of 5.625 seems really close to the answer now. But because its square is bigger than 30, we know the root must be smaller than 5.625, so:

That’s really far away. This can’t be the answer, but lets keep looking. Since its square is smaller than 30, we change the lower bound to this.

We are getting closer again, but this is smaller than 30, so our lower bound should be changed.

I know, it starts to get frustrating at this point since we seem to be crawling, but lets stay on for another two rounds. The number in the middle is 5.390625

Our result now is very very close to 30. It is smaller, so the lower bound should be changed.

Okay! We are pretty close, but the important thing is we know it will eventually arrive at the answer because we kept getting closer to the answer as we went. Now, we know computers do things faster than we do so let us write some code!

So first of all, we want to have our initial guess. The number to be rooted is 30.

Then, we write down what we did in every iteration.

Next, we tell the computer to do it over and over again until the square of our guess is the number itself, so we wrap that in a loop.

Great, that seems simple enough. Let’s put it all together.

Notice I put in a printf to check the bounds as it runs. This makes it more interesting and actually shows us what’s going on. Lets run it now.

This method of calculating square roots is called the Bisection method, also known as a binary search. Its not very efficient as you can see, and takes a long time to converge.

Now we know what it takes to find a square root! Now you can simply try it with a bunch of numbers and get the right answer. You can also compare the answer with the actual sqrt() function provided by the standard library.

It is also interesting to note that you can use this method to get cube roots, quartic roots and quintic roots too.